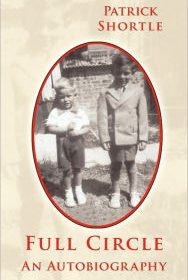 Former racecar driver Patrick Shortle takes a rambling, 269-page journey through his life in Full Circle, and despite some stylistic shortcomings, it’s generally an entertaining ride.

Shortle was born in a post-war Britain still struggling to get on its feet, as was his family. They lived in a military hut when he was a child. His father left them, and Shortle’s early years were difficult, though not unhappy. After marrying, he started a successful plastering business before finding his true calling: motor racing.

Shortle gained some success and fame in several levels of racing: speedway bikes, Formula Fords, karts. He also worked as an instructor, a driver for racecar manufacturer Reynard Motorsport and a manager of Snetterton Motor Racing Circuit, a prestigious track in Norfolk, England. When he left racing in 2004, he returned to plastering – completing the “full circle” of the title – and re-established himself as a successful businessman.

At the outset of his autobiography, Shortle tells us that he has never written anything outside of an occasional birthday or Christmas card. Unfortunately, it shows. He writes in a meandering, stream-of-consciousness style, with sentence fragments, random abbreviations and capitalizations, and words often misused (“residence” instead of “residents,” “clime” instead of “climb,” a person “never new much” about something). He employs commas as though they pay a bonus: an epic 476-word sentence is peppered with 65 of them.

Despite these land mines, the book has an undeniable charm, largely because of his colorful language. When a plan goes bad, “everything went pear-shaped.” Eavesdropping becomes “I would earwig to get more information.” Putting something past one’s parents translates to “nobody ever twigged what we (were) up to.”

That sort of writing, along with his easygoing style, a fairly interesting life and his charming character, makes Full Circle a pleasant read for those who can get past the many mechanical issues.