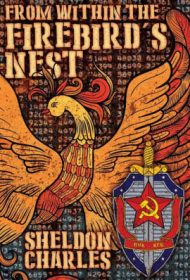 Sheldon Charles’ entertaining thriller is his third featuring writer Evan Davis. In this installment, Evan finds himself racing to prevent the deployment of a nearly forgotten Cold War weapon.

As the novel begins, Evan is at a career and relationship impasse. Then, under mysterious circumstances, he meets Dieter, an ex-Stasi operative. Familiar with Evan’s previous exploits, Dieter reveals the existence of a terrifying Cold War relic. Through an operation known as Crimson Firebird, Soviet sleeper agents were placed across the United States decades ago, and continue to monitor radio “numbers stations” for potential orders to unleash a biological attack against the U.S.

Dieter hires Evan to convince one of the sleepers, currently living in Oklahoma, to defect and help disarm the weapons. Shortly thereafter, Evan meets Nikki, who might be the woman of his dreams but has a secret of her own.

Meanwhile, Abi, a disaffected Palestinian-British teenager, stumbles upon one of the numbers stations. At first unsure of its purpose, he soon realizes its potential to avenge his father’s death by wreaking havoc on the United States. The novel culminates as Evan and his allies rush to avert the devastation Abi is on the verge of unleashing.

The narrative follows not only Evan but several other characters, across varying locations and time periods. In a lesser writer’s hands, this could be a liability, but Charles renders all his characters believable and endows them with fully-realized backstories. In particular, the two Russian agents controlling the numbers stations from a Mexican outpost impress with realistic motivations and quirks, despite their fairly brief appearances in the novel. Charles also skillfully balances all the structural elements of his complex plot, maintaining tension but never adding unnecessary complication or filler.

From Within the Firebird’s Nest should appeal to fans of Cold War espionage great Robert Littell, and leave readers eagerly awaiting Evan’s next adventure.