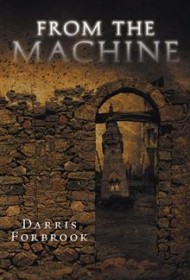 This intriguing, futuristic, science fiction novel takes place after a worldwide pandemic. With no main protagonist, the tale is told in ten chapters that highlight ten different people whose lives intersect.

While this story construction can be confusing at first, readers grow to appreciate its sophistication as eventually the plot coalesces through dialogue, narrative, poetry, Spanish (unfortunately not translated), symbols, and repeated mottos, including “The unknown is our sickness; the truth is our cure.”

Desperate for a leader, a savior, and an antidote to the disease, survivors argue and fight among themselves. A governing force, The Company, holds sway over these survivors, promising a vaccine, although The Resistance opposes its methods. Meanwhile, a scientist works on an antidote while his daughter suffers from the disease, which manifests as a black shadow running up the left arm. Victims eventually lose their minds and live like wild animals until their death – usually by murder. Attempting to ease tensions, a politician acts as liaison between various factions.

The Prologue and Epilogue refer to “a being born of parts” from a vast machine, who is rejected by humans until needed to shed beauty on the darkness (a Christ figure, perhaps). This character appears in the story as “the vagabond,” a sexless, voiceless being intent on punishing the guilty and rewarding the innocent. Feared by some, revered by others, the vagabond wears a face visor that reflects people’s images back on themselves.

Much of this novel is couched in symbolism, and therefore, the meaning isn’t always direct, but the ideas are provocative and engaging. The back cover notes that the author was recently diagnosed with clinical depression, and much of the story explores how society outcasts those with sickness.

From the Machine could be improved with a light edit to correct occasional incorrect word choices, missing words, and capitalization errors. However, these minor problems shouldn’t deter sci-fi fans from enjoying this intricately woven, skillfully crafted story.