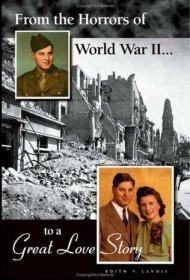 When Edith V. Landis describes her life during World War II, she turns this oft-told story on its head by narrowly focusing on daily life, rather than the broader canvas of the war. Born in Berlin in 1925, just a few years before Hitler came into power, she offers her perceptions of the war as experienced by a middle-class, coming-of-age gentile, early on making it worth her readers’ while to revisit this chapter of history.

Landis’ straightforward account recalls the drastic changes to her homeland after World War I and the advent of Nazism in the 1930s. As tyranny under Hitler grew, so did fear among the populace, many who fled the country or were arrested and never seen again. Landis was 14 when Hitler triggered the war. Six years later, during the final siege of Berlin, Landis takes readers through daily air raids and into the bomb shelters, mangled streets and looted stores. She includes photos of her city before and after Germany fell.

Because it doesn’t grapple with the Holocaust, her narrative feels incomplete at first, with only passing reference, for example, to Kristallnacht, the start of the Nazi’s
“Final Solution” for the Jews. Landis’ story intensifies, however, as she tells of tragic events she witnessed among her family and friends, both during Hitler’s regime and in the war’s aftermath. Once, she led a shell-shocked German soldier (nearly as young as she) out of enemy fire on the streets to safety.

In the last half of the book, her story loses its dramatic edge. After the American military arrived, Landis met her future husband, a G.I. who wanted to bring her to the States as one of the era’s first war brides. The couple waded through voluminous red tape on both sides of the Atlantic, which she documents in sometimes-excessive detail. For the reader, her romance pales next to the engrossing survival story that preceded it. But there’s some comfort in a happy ending.