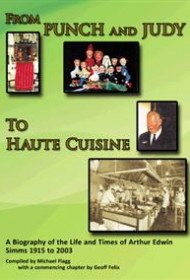 The hospitality industry in the British Isles owes much to Arthur Edwin Simms, the son of a famous Punch and Judy puppeteer whose productions at Buckingham Palace during the 1920‘s introduced his boy Arthur to the magnificent palace kitchen where, after enjoying his first taste of ice cream, he became enchanted by the culinary arts. Through hard work and determination, Simms pursued a career as a distinguished chef, despite the limited formal training opportunities available between the wars.

Author Michael Flagg, Simms’ former protégé and personal friend, has compiled a voluminous historical narrative of how Simms eventually built the standards for the British catering educational system through the construction of specialized technical colleges. An obvious admirer of Simms, Flagg’s tome pays homage to the man, his times, and the impressive educational system Simms championed through administrative leadership, political know-how, and his passion for the emerging field of technical education.

The promised biography of Simms is awkwardly interwoven into the book’s greater narrative concerning the history of vocational training in the UK hotel industry. Simms’ voice appears occasionally in long quotations garnered through interviews, but his story is often obscured by the overwhelmingly detailed discussion of the history of various institutions. Readers may find it daunting to navigate the poorly organized, overly long hodgepodge of facts, figures, and academic citations and rambling, lengthy paragraphs of reflection, which often digress into scholarly accounts. In addition, Flagg archives copious amounts of data and the work of other researchers, as well as many primary documents, such as charts, letters, contracts and menus. The reprint of Simms’ obituary toward the end presents a succinct and welcome overview of the man’s life.

Flagg’s goal is to recognize the respect and credit due Simms. While too exhaustive for casual readers, this mountain of information may be useful to students and instructors in hospitality and catering, though likely not as engaging as they might wish.