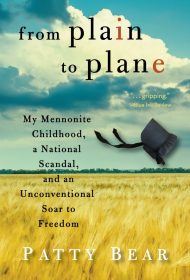 Patty Bear’s captivating memoir, From Plain to Plane, recounts her tumultuous childhood as a member of the Reformed Mennonite Church and her remarkable triumph over troubled circumstances.

Reformed Mennonites are known as the “Plain People of Pennsylvania,” Bear writes, “because of how [they] dress and live. Simply, humbly, separate.” Bear lived on a thriving, bucolic 400-acre farm with her parents and six siblings. But in 1972, at age eight, her life was inextricably altered when the church excommunicated her father, Robert Bear, for “raillery” after a disagreement with the ministers. He was formally shunned by his family and community.

In the aftermath, Robert wooed the press, playing the victim—a man who only wished to reunite with his family— and gaining national notoriety from publications like People and the New York Times, all while terrorizing his family behind the scenes. He appeared at the farm without warning, shouting Bible verses and attacking Bear’s mother. “[H]e would slap, push, and strike her. Each time he insisted she had brought this all on herself.” He took food from his family’s freezers and, for a while, all the proceeds from the farm, leaving Bear’s mother struggling to feed her children. Despite the family’s attempts to hide by moving at various times, he found them and continued his abuse, even attempting to kidnap his wife, resulting in criminal charges.

Amid this chaos, the author, incredibly, excelled in academics and sports and even earned a pilot’s license. While Bear’s ability to afford college seemed unlikely, after attending a presentation about the United States Air Force Academy, she applied for admission, and, to her amazement, was accepted, thus launching her eventual airline pilot career.

The writing has a few distractions. Each chapter is divided into years and further into short vignettes, which makes reading choppy. Although she dedicates the book partly to her “beloved spirit Guides” and emphasizes their importance in the book’s foreword and conclusion, Bear barely discusses them in the narrative.

Despite such issues, however, this is a gripping story—one sure to resonate with anyone who believes in the power of the underdog.