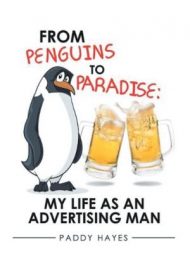 Have you ever wondered how a clever TV commercial or catchy advertising phrase evolves? In his memoir, From Penguins to Paradise, ad man Paddy Hayes recalls his advertising career, providing an entertaining peek behind the scenes of the international advertising world.

Born in Kent, England, Hayes fell into advertising by accident and forged a satisfying and successful career that spanned 1972 – 1995. It began in London and later took him to Singapore, Indonesia, Tokyo, China, and Eastern Europe, among other locales.

The book is chockfull of amusing anecdotes. In his first job, tasked with the Penguin biscuit ad campaign, Hayes suggested using Emperor Penguins from a local zoo in a television commercial. Unfortunately, by the time filming began, the penguins had molted their black-and-white winter plumage and were now brown and yellow! Water-based paint returned the birds to their tuxedoed appearance—but this washed away as the animals cooled themselves in children’s swimming pools. Despite the mishaps, the commercial aired to great acclaim.

Hayes learned that understanding the local culture was essential to advertising success. In Malaysia and researching for a shampoo campaign, he learned that Malay women pour a small amount of water over their heads after sex (considered hair-washing), thereby making the promotion a delicate endeavor.

Hayes’ relatable prose is akin to hearing a friend tell stories over dinner. He provides just the right amount of detail, allowing readers to enjoy his hijinks while keeping the narrative nicely paced and engaging. Hayes interweaves personal and professional experiences effortlessly (although some personal tales aren’t politically correct these days, including encounters with Bangkok’s “comfort industry” and an incident when he was warned of the perils of “Blacks” on the streets of Chicago, which he relates without comment).

This behind-the-scenes glimpse into the advertising world, as well as the experiences of an Englishman living in the Far East, result in an engrossing story likely to resonate with any curious reader looking for a high-spirited read.