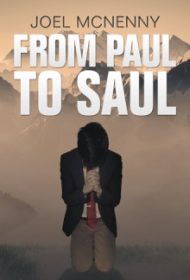 Equal parts cautionary tale and coming-of-age story, Joel McNenny’s addictively readable novel answers the question, “What if the Christian Right succeeded in their mission to bring America back to God?”

McNenny’s story is set in the near future. Evangelical Christians have experienced a great Awakening and effectively usurped their religion for political purposes, turning the country into the Christian States of America. With the lines between Church and State erased, the populace is essentially ruled by an authoritarian government that monitors its citizens’ every move.

The story revolves around three young people in Columbus, Ohio: Maggie, who ran away from home after her pastor father sexually abused her; Josh, whose family relocated to Columbus after his father was promoted to a prestigious Department of Homeland Security (DHS) position; and Peter, a seemingly perfect example of Christian youth who befriends Josh.

Maggie, homeless and stealing to survive with a group of misfit friends, is helped by a benevolent social worker who eventually facilitates her enrollment into Ohio State University. Josh and Peter—both exemplary students in the elite Josephs of Tomorrow program—follow very different paths after high school graduation. Peter travels the world on missionary work while Josh enrolls at OSU, meets Maggie, and falls in love. But can a young woman whose friends are hunted by DHS date the son of a DHS leader?

The story is powered by deep character development and weighty themes, but it’s the author’s world-building that makes it so memorable. His use of Biblical references in everyday talk, for example, is sublime. (If something is cool, it’s “solomon;” a crazy situation is “babel.”) The novel’s timeliness adds to its allure; some of the events chronicled are unfolding today, such as Christian nationalists advancing their goals in state legislatures across the country.

Ultimately, this is a look at how religions, through indoctrination and fear, cultivate that which they supposedly preach against: prejudice, hatred, and intolerance. Readers will find it intensely profound and provocative.