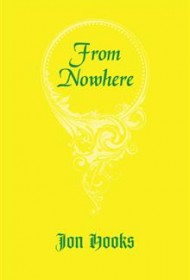 Jon Hooks’ compelling novel is about love, death, the stages of grief and golf. It’s to Hooks’ credit that although the blurb on the book cover includes a major spoiler, when the incident occurs in the early chapters of From Nowhere, it still packs a punch.

Protagonist Brad Ford is no stranger to grief: His mother died when he was 14, and his father passed away when Brad attended Wake Forest University on a golf scholarship. He converts his success in college golf to the national scene, which eventually takes him to the U.S. Open in his mid-20s. There, Brad shoots the best game of his life—at the  same time that his beloved wife and young son are murdered in a robbery gone bad. The Open makes another appearance seven years later as Brad not only accepts but ultimately embraces the direction his life takes.

Hooks successfully creates tension not only as Brad endures his losses, but also on the golf course where every hole, like each phase of his grief, is an obstacle to overcome. Brad is a likeable guy in an unenviable situation; Hooks evokes the emotional twists and downward spirals he experiences without being morose or mawkish.

Brad is also the epitome of a southern gentleman, and the dialogue reflects Brad’s southern charm with plenty of “yes ma’ams” and “yes sirs.” References to Sunday chicken dinners and descriptions of the stifling humidity help enrich the atmosphere as well.

The story has some minor drawbacks. It’s often difficult to keep track of the numerous characters Hooks introduces. Many help provide Brad’s backstory, while others propel him forward after the tragic loss of his family, but a few simply get in the way. The story can also seem predictable and contains occasional distracting typos,

Despite such issues, From Nowhere delivers an appealing, heartfelt story. It is sure to please a wide audience with its convincing narrative about weathering loss and moving forward in life.