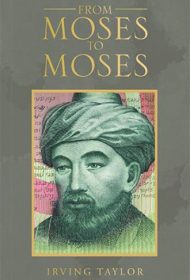 With From Moses to Moses, English author Irving Taylor has created a vibrant fictional account of the life of Moses Maimonides, a man known best through his many scholarly writings handed down through the ages.

Maimonides was born in Cordoba, Spain in 1135, a time when Jews flourished under Islamic rule. Raised by his rabbi father, Maimonides became recognized for his intellect, even as a youth. But his life was soon jarred by religious and political upheaval. Forced by a new leader to convert to Islam or leave Spain, Maimonides’ family first feigned conversion, then fled, finally settling in Morocco and later in Egypt. During this period, Moses pursued his interest in science and religion. He eventually gained prominence as a healer, leader of the Jewish community in Egypt, and physician to the royal family. Maimonides also wrote documents considered essential texts of Judaism, including Commentary on the Mishnah, The Mishneh Torah, and Guide to the Perplexed.

Taylor shows a keen grasp of the historical period and its complexity and fills in some unknowns about Maimonides, creating a stepmother and portraying his wife as a strong person in her own right. He doesn’t shrink from exploring the many criticisms aimed at Maimonides back then but keeps the overall portrait positive, emphasizing the philosopher’s unusually liberal views on women’s rights and citing cases showing him making open-minded judgments based on his best understanding of God, science and scripture.

The author writes with evident enjoyment, but often Taylor tells, rather than shows readers what’s happening, and sometimes the prose has a textbook-like feel: “Alexandria was a most impressive city. It was built in style by Alexander the Great in 332 BCE and had become a thriving metropolis…”

Despite such issues, the book will be appreciated by those familiar with Maimonides’ teachings or fascinated by the historical period, laden as it was with factors—political, religious, ethical—that still plague the Middle East today.