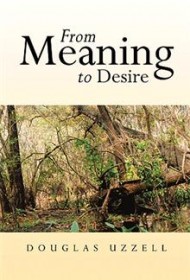 A single fictional character appearing in several short stories can become more vivid to readers as they see her from multiple points of view. In From Meaning to Desire, Lillian falls apart but puts herself back together, emerging stronger in the process.

This collection of nine stories set in the early 1960s, with flashbacks reaching as far back as WWI, opens with “Lillian at Thirty-Eight.” Here, our protagonist is chagrined at becoming a grandmother to her 19-year-old daughter’s child, who she and her husband have taken a road trip to visit. Subsequent stories illuminate their conflicted relationship, and the sequence of events that cursed this particular family visit. In the aftermath, bit players in other stories come into their own and take center stage.

Author Douglas Uzzell is a fine writer. In a scene set during WWI, a character stumbles upon a corpse. “Ants swarmed over the gore, picking their way in and out of cavities, racing off into the grass with their bloody treasures. Lou had an image of the man being gradually transported bit by bit into a giant anthill—shoes, uniform, cartridge belt, canteen and all.” Stories set during the Civil Rights movement and then the Vietnam War give the collection a long view of history against which to view these characters

The passages from the early 1960s echo the work of Richard Yates or John Cheever, full of difficult conversations and brief, eruptive arguments, with a tinkling glass of something over ice ever at hand as social lubricant.

Lillian makes some choices that seem dangerously misguided, leading her into the arms of someone who took an unforgivable liberty with her. This behavior is never really explained by what comes before or after. And the final story veers slightly from the path laid by those preceding it.

But overall, From Meaning to Desire shows evidence of great care in its creation, delivering stories that linger powerfully in the mind after reading.