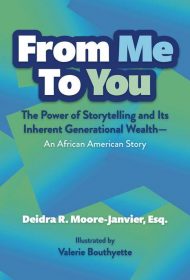 A thoughtful examination primarily of the United States’ history of slavery, but including the historical presence of slavery around the world and the continued impacts of slavery, From Me to You presents a useful introduction to a challenging topic.

From Me to You was inspired by the author’s eight-year-old son Justin asking about slavery. The resulting book is framed as a conversation between Justin and his mother, who informs her son about slavery and its history while answering his questions as they arise.

Author Deidra R. Moore-Janvier weaves together facts, synthesized biographies of Civil Rights activists and others. She starts with some historical context, delves into the transatlantic slave trade, and chronicles the Civil War and Reconstruction, concluding around the time of the Civil Rights Movement. An afterword discusses the continuing impact of slavery and racism in America and the world.

From Me to You is only lightly illustrated, but those illustrations are expressive and narrative enhancing. It can be leveraged by parents to begin engaging their children with history. However, while it would seem to be targeted to children eight years old (like Justin) and above, it skews much older, tending to emphasize governmental action, wars, and other large-scale decisions and events, rather than stories from the people whose lives were impacted. The latter approach might have connected with young readers better.

The book also draws heavily from secondary sources, quoting long passages filled with language that will be extremely challenging for young readers, as in: “When the Spaniards conquered the New World, they resorted to a system of forced labor called the encomienda. An encomienda was an organization in which a Spaniard received a restricted set of property rights over Indian labor from the Crown whereby the Spaniard (an encomendero) could extract tribute (payment of a portion of output)…”

This is a deeply considered, well-intentioned offering that will help adults seeking to give their children a more thorough understanding of slavery. The children most likely to benefit from the narrative, however, will likely be much older than eight.