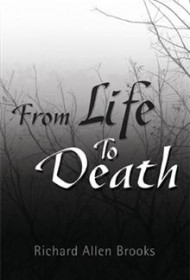 From Life to Death is an expansive and ambitious title for a collection of poetry, but Richard Allen Brooks undeniably covers life, death, and many other topics in this, his first book of poems.

The book’s foreword warns: “If you are seeking perfect rhyme and meter, go no further because you are about to read the wrong book of poetry.” Indeed, Brooks seems to pay little attention to the trappings of traditional poetry. This could be seen as bold innovation, except that the absence of such elements in these poems is so stark that they often read as prose, as in “This Troubled World”: “EVENTS THAT BRING ABOUT CAUSE AND EFFECTS./THERE ARE AIR—AND WATER-POLLUTION PROBLEMS ./ NO LONGER CAN THESE PROBLEMS BE IGNORED…”

Occasionally, Brooks makes an effort to use rhyme, set some form to his observations, or restrict himself to certain consonant beginnings sounds, such as his use of the letter P in “Baron O’Brien”: “BARON O’BRIEN IS NOT ONE FOR PROTRACTION. /THERE HAVE BEEN CONCERNS ABOUT HIS PACE, / EVEN THOUGH HE MAY APPEAR PALTRY,/HE IS NOT KNOWN TO REGARD PROMPTITUDE.” But these attempts, few in number, seem guided more by an interest in paging through a thesaurus than in delivering clear communication.

Also, Brooks chooses to present every poem entirely in capital letters, which results in every letter and word having a somewhat equal standing in his poems. This results in a loss of some of the ebb and flow that a typical stanza—or sentence—would enjoy.

Brooks clearly has life experience and plenty of stories to tell, but they might have been better presented as a collection of essays, anecdotes, or maxims. As an honest document from the mind of a thoughtful man, From Life to Death has some merit, but as poetry, the book doesn’t deliver.