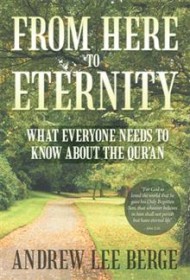 Written in the tradition of Robert Spencer’s The Politically Incorrect Guide to Islam, Andrew Lee Berge’s From Here to Eternity examines passages in Christian scripture and the Qur’an in order to demonstrate what he feels are drastic and treacherous differences between the two. Using the Inspired Version of the Bible and Joseph Smith’s writings as his foundation, he examines what he sees as tragic flaws in the Qur’an and what he believes are the true teachings of God.

“This book is to give understanding as to why some of those of the Islam faith believe they will be rewarded in the next life by taking their life and the life of others,“ he writes. “After the events of 9/11…I began to search for the reason for such actions. I learned they had the belief that martyrs were promised they would receive rewards of paradise and virgins in the next life. These promises are false according to the New Testament of God’s word.”

In addition to his disapproval of Qur’anic teachings, Berge (whose online biography lists him as a minster of Christ) levels harsh criticism against homosexuals and anyone who opposes what he believes is the one true faith.

Berge’s prose, while rough at times, is mostly easy to understand (though there are many run-on sentences). The book is in need of professional copyediting, however, and there is also quite a bit of redundancy (for example, the author often repeats that there are two Churches, the Church of the Lamb of God and the Church of Satan). Additionally, the book’s flow is uneven, with long chapters followed with chapters of only one page (these seem like afterthoughts that could have been cut).

The main problem, though, is Berge’s zealousness in his beliefs. The author is likely to alienate the majority of readers with his many controversial views, religious, cultural and otherwise, leaving a small, niche audience who may find his book compelling.