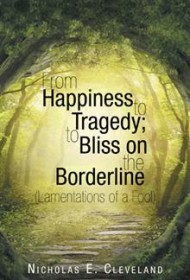 In his memoir, Nicholas E. Cleveland aims to sort out the events of his life and, as he states in his Introduction, “tries to make sense of life in general.”

Cleveland has lived the highest of highs and the lowest of lows in his relationships. Married to a woman he loved for 27 years, the author went from “perfect life” to agony upon her sudden death. He grieved deeply for ten months until he met the woman who would become his second wife, his “angel.” He married her within three months, and then was shocked to discover that her true self was not as it appeared, later believing she had a borderline personality disorder.

While compelling in outline, Cleveland’s story doesn’t read like a carefully crafted narrative, but rather as if written stream-of-consciousness or as a private journal. His topics come and go with scant organization. For instance, one chapter starts on the Saturday after Thanksgiving, then progresses backward to his building a house. It then touches on, in this order: his father’s heart attack; a life lesson learned; his wife’s death; his wife’s illness; a vacation with his wife to Michigan; high school English class; his wife’s trip to the hospital, and back to the Saturday after Thanksgiving.

In addition to the chaotic writing style, Cleveland’s sexist views may turn off readers. For example, he states his belief that it’s his wife’s job to clean the house and that his wife couldn’t keep up with him on a hike because “she was a girl.” Readers of delicate sensibilities should also be aware of the heavy sexual content Cleveland uses in describing his relationship with his second wife.

Cleveland has an interesting story to tell and has learned many lessons, both about borderline personality disorder and himself. He will need to revise with an eye to better organizing his thoughts, however, if he hopes to attract an enthusiastic audience.