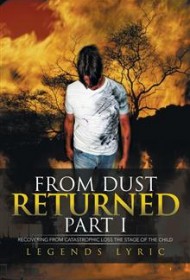 A young man shares with a stranger insights from his personal journey through dark, emotional times in this incompletely developed story set in the present day.

Author Legends Lyric combines true details from his personal circumstances with a thin fictional set-up and characters to share his 14 years of psychological challenges and what brought him back from the brink. Lyric relates his story through Grandpa Richard speaking with his “angels,” Faith, Hope and Charity, about having years before met and interviewed an insightful man named Legends Lyric, whose tale impacted his life.

Much of the book is written in the first person as Lyric discusses becoming severely mentally imbalanced after experiencing events in his late teens that ruined his reputation and led to a divorce and a loss of career and friends. Eventually, he finds a “guide” who helps him to heal through various minimal suggestions (such as “breathing from the diaphragm,” and “being kind in your thoughts”) that he shares near book’s end. However, he closes by saying the worst is yet to come and leaves the story “to be continued.”

Much of the book, written in italics, personalizes how highly distraught Lyric had become:  “I am freaking out here. Wow. This is a lot of pain. Ahh! What is this cold dark state? . . . Is this hell? Where is sanity?” As the book nears conclusion, it leans heavily into the author’s real life plight, and the story line fades toward a nonfiction, self-help book.

This fiction/nonfiction setup proves odd and ineffective both as a showcase for a work aiming to help others toward healing and as a retelling of the author’s struggles. If rewritten as clear nonfiction, given editing attention and many more details, the book may touch a chord with others facing similar difficulties.