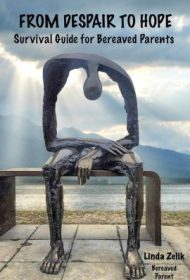 Nine years of her own evolution from devastation to acceptance, Linda Zelik offers this valuable book to aid other parents grieving the sudden death of a child.

Linda and her husband had no time to prepare for the shock of her 24-year-old son Kevin’s death by asphyxiation. “The next three years were the most difficult I have ever endured.” After the help of a nationwide network called The Compassionate Friends, Linda has healed enough to add a distinctive new perspective to the literature on grief.

In Part One, she briefly tells about Kevin’s birth adoption and the easy-going, creative Eagle Scout he grew up to be. She also squarely faces the secret activity that killed him five weeks after his college graduation: He occasionally “huffed” from an aerosol can of computer duster to relieve anxiety.

In Part Two, Linda offers advice (from her own experience, other bereaved parents, and experts)  about how to endure the first stage of shock and anger before learning to live with the loss. The 26 short chapters, meant to be read randomly when the subject applies, are written simply and clearly for readers who may be in a fog of pain and prescription medicine. They address issues such as: “Where Are You, Lord?”; how to stay informed without watching triggering TV newscasts; how to memorialize the child; and the importance of being honest with the child’s siblings following a suicide.

Part Three explains how Linda, a devout Catholic, became convinced that Kevin’s spirit is communicating with her from the Other Side. She gives advice on how to recognize a legitimate psychic medium from a fraud and relates a variety of communications she has received, including dreams, music, the appearance of butterflies, and silly “pranks” Kevin’s spirit has played on family members.

With its compassion, real-life solutions, and gentle humor, From Despair to Hope is an invaluable map for a road no parent wants to travel, but some must.