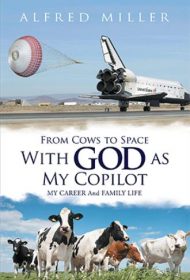 As a kid, Miller worked on the family farm in Wasco, California. Among his tasks was milking 100 cows a day. It was exhausting, and he chose college as an escape, first at Bakersfield Junior College, then Cal-Berkeley. Upon graduation in 1953, he answered an ad and was hired at the Air Force Flight Test Center at Edwards Air Force Base in California. Coming aboard as a project mathematician, he was an integral part of Edwards for 40 years and a pioneer in the use of computers to analyze flight test data. His career spanned supersonic craft to the Space Shuttle.

Miller’s work, however, is only part of the book. Much of his story is rooted in family and his God-centered approach to life. (Writing about his Catholicism, he notes: “I learned how to genuflect and when to genuflect. It was so ingrained in me that I would genuflect before I sat down at the movies . . .”) With his teenage sweetheart, he had eight children. While he loved his work, it’s obvious that family has been dearest to him, from his Swiss immigrant parents and siblings to his children and subsequent generations. Throughout his story, he credits all to God.

Miller’s writing isn’t flashy; passages about digital radars, instrumentation, data measurement, engineering, mathematics and other technical aspects of his job could deter some readers. Fortunately, he touches on these elements lightly, without diving too deep.

Miller started writing the book when he turned 88 and completed it in 11 months. He says he wanted to recount his life’s story for his family and to help them navigate today’s society. For that reason, this is more a family treasure than a book for general readers. Still, aeronautic enthusiasts might appreciate Miller’s book for its behind-the-scenes look at his work at Edwards.