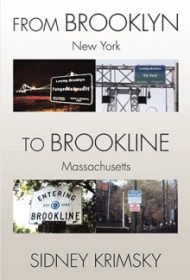 In this classic American Dream odyssey, Sidney Krimsky, son of Jewish Ukrainian immigrants, recounts his post-WWII childhood in Brooklyn, NY, and the personal and professional journey that brought him to Brookline, Massachusetts. Throughout, he describes how he came to embrace the core values of his Jewish heritage.

Krimsky was born with rickets to uneducated but loving parents who lived in substandard housing; his father was a house painter. The author recounts his extensive family tree, and his boyhood memories—which detail streets, stores, schools, and synagogues—unfold as a map of landmarks, such as Nathan’s Famous hot dog concession in Coney Island, where he worked summers. In this vibrant community of Holocaust survivors, Krimsky learned to acknowledge “evil in the world” and the meaning of survival.

While Krimsky’s early Jewish education ended after his bar-mitzvah, his public education advanced his aptitude in math and science, culminating in a degree in engineering/physics from Brooklyn College, CCNY, and Northeastern Unviversity. The author’s impressive career included employment at high-level military research and development corporations during the Cold War, jobs that prompted him to reflect on world issues, cosmology, and Jewish philosophy. Married in 1966, he raised his family in Brookline’s orthodox Jewish community, proudly serving on Jewish day school and civic boards.

While Krimsky’s story admirably demonstrates the importance of a life of integrity, it can be a challenging read. Anecdotes are repetitive, and the prose includes many untranslated Yiddish terms and federal acronyms. The narrative is exhaustive, lacking color that would enliven the tale. It also includes immigration records, eulogies, obituaries, letters, technical illustrations, mathematical formulas, and musings on particle physics; many of the latter will be incomprehensible to most readers.

Given such issues, this memoir is unlikely to appeal to general readers. It may, however, be of interest to Brooklynites, individuals concerned with the military industrial complex, science buffs, and Talmudic students. It also offers valuable lessons the author aims to impart to his children.