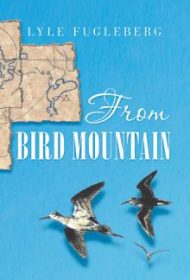 Lyle Fugleberg’s extensive historical research steers the tone, mood and course of From Bird Mountain, an engaging epic tale that kicks off more than 1,000 years ago.

Set in the year 982 in the Norwegian wildlands, Fugleberg’s tale of a drawn-out quest for familial vengeance finds its anchor in the mythology and history of medieval Norway during a time the author refers to loosely as “The Viking Period.” The protagonists, the villains, and the action owe much to careful historical research rooted in Scandinavian history.

Gunnar and Gyrth Torkelsson are brothers living on opposite sides of the plateau known as Bird Mountain, and their role as farmers dictates their lot in their feudal existence. Specifically, they’re at the mercy of the whims of Earl Hakon and his jarls, or local chiefs. It’s a subservient role that doesn’t sit well with Gunnar, who objects to paying the earl’s levies. That resistance proves fatal, and Gyrth finds himself shaken from his familiar, predictable lifestyle after his brother’s murder. Along with Sigurth, a survivor of Hakon’s violence, Gyrth sets out to reclaim his family’s rightful dues. The book then tracks their voyages through medieval Scandinavia and the progress of their familial line.

Fugleberg spins a tale that spans generations and takes his characters across the limits of the known Scandinavian world at the cusp of 11th century. What begins as a tale of two simple brothers unfurls over the course of more than 400 pages into an impressive foray into historical fiction, one with enough duly cited research and actual historical characters to impress James Michener.

Fugleberg’s unerring eye for history gives the work a convincing and compelling quality, only slightly derailed by simple spelling and grammatical errors throughout and some superfluous passages that could easily have been eliminated. While some may be overwhelmed by the tale’s sheer scope, the epic saga offers absorbing depth and action for anyone with an interest in medieval European or Scandinavian history.