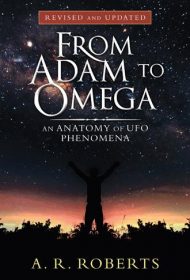 Eight years ago, A.R. Roberts published From Adam to Omega, a thought-provoking look at the UFO phenomena, in which, after listing myriad UFO sightings and visitations, he attempted to explain how extra-terrestrials had influenced most, if not all, biblical events. The revised edition expounds on those events and adds his conjectures concerning the visitations’ purpose, the identities of some of the visitors and predictions for the future.

True believers and those curious about the possibility that civilizations from other planets have visited (or are visiting Earth) will find Roberts’ conjectures interesting, believable or not. As the author says dozens of times in various ways: “…I am simply presenting evidence that suggests these things, and it is up to you to form your own opinions and conclusions.”

Most of the book is devoted to Roberts’ hypothesis that aliens have been controlling human evolution since the time of Adam. Thus, sprinkled among the population are an unknown number of alien/human hybrids.

The author also posits that alien visitors from at least two star systems are aware that in the future, a catastrophe will occur that could eliminate the human race, and they’re trying to save us by advancing our intelligence and ethics to enable the race to escape Earth when the planet can no longer support life. Roberts spends little time explaining why the ETs are bothering with this agenda. Near the end, though, he expresses his belief that they look at us the way we do animals in danger of extinction; they aim to save the human race from that fate.

Roberts’ folksy, easily readable, if somewhat repetitive, style is consistent with the original, and some of his new conclusions make the later book superior. However, the revised edition doesn’t add enough information to make buying a new copy imperative.

There’s no question, however, that this is among the more interesting books about UFOs. It’s definitely worth reading for anyone even mildly interested in the subject.