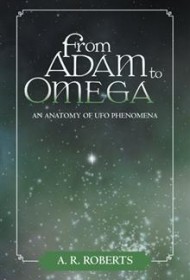 A.R. Roberts first spotted a UFO when he was a volunteer in the Ground Observer Corps (GOC) during the Cold War in 1954. The GOC scanned the skies when on duty Friday nights, reporting all aircraft flying over the area to an Air Force Filter Center. Now Roberts has compiled his discoveries and conjectures from 60 years of studying UFO phenomena into his hefty volume, From Adam to Omega: An Anatomy of UFO Phenomena.

Standing at nearly 500 pages, the book’s first half is a rehash of many of the most common UFO legends, including the 1947 Roswell incident and the alien abductions remembered by alleged victims under hypnosis. The second section of the book is more interesting, as Roberts interprets the Bible using his UFO theory to explain dozens of incidents in both the Old and New Testaments.

Indeed, many of Roberts’ interpretations are as believable and rational as taking on faith biblical miracles such as Moses’ parting of the waters and Jesus’ raising the dead. Attributing the wheel Ezekiel saw in the sky to a UFO is certainly a plausible conjecture. However, some of the author’s explanations are farther out there than the UFOs themselves. For example, the author’s implication that many of the great minds of the past, such as “Archimedes, Heron, Copernicus, Leonardo da Vinci, and Galileo to name a few,” might have been alien/human hybrids seems a rather large stretch.

Frequently, the author repeats his theories, almost as if the chapters had been separate essays that had not been edited when they became a book. The stories of Elisha and Elijah appear in the book several times, as do passages from Revelation and the Gospels.

Roberts makes references in the early chapters to photographs that seem to prove the existence of UFOs; including these photos would have been a definite plus.

In all, From Adam to Omega provides a thought-provoking look at both UFOs and religion. With some adept editing, it could take its place among the more intriguing examinations of UFOs and alien visitations.