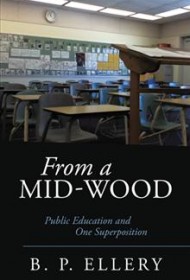 The title of From a Mid-Wood: Public Education and One Superposition might indicate a dry nonfiction read about teaching principles, but B. P. Ellery’s book is actually a frequently hilarious though rambling social satire.

The beleaguered hero of this hefty novel is a Southern California English teacher named Ryan Tether, whose surname fits: Suffering from what the boob tube calls “erectile dysfunction,” a crisis of faith in his life’s work and gnawing unease with America’s role in three wars (the author tosses in Iran for good measure), poor Ry’s at the end of his rope. But before we reach the tale’s conclusion, Ellery immerses us in the quagmire of public education theory, the moronic ravings of a cocky U.S. President from Texas and the follies of domestic life.

Ellery notes on the back cover that he’s a school janitor who sidelines in feng shui. Let’s hope he’s as good with a mop and bucket as with a written barb. Assuring the nation on TV about the War on Terror, President “Plant” declares: “’We must continue down this road or we will be sending the wrong message to people seeking freedom everywhere’.” Comes Ellery’s kicker: “An ad for odor eaters appeared immediately after . . .”

Ellery has a keen eye for absurdity, but 601 repetitious pages are too many. Perhaps if he suppressed the policy wonk in him—the guy who goes on about school vouchers and standards testing—and amplified his budding Vonnegut/Waugh/Southern, a much shorter book would sustain the laugh-power of, say, his inspired twin finales. In one, his paranoid president wrestles a startled high school civics teacher to the ground in the Rose Garden; in the next, a crazed gunman goes berserk in a supermarket, shooting bullets through the intimate regions of a smiling cardboard-cutout beauty calculated to sell condoms. Black humor this sharp should not be diluted.