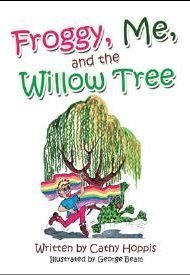 A boy tells of meeting a talking frog and creating a rainbow in Cathy Hoppis’s sweet and gentle picture book Froggy, Me, and the Willow Tree.

The story begins with a boy standing alone near a willow tree, recalling an adventure in which he met a talking frog. Then, in an extended flashback, we see the two becoming fast friends, swimming, picking flowers, and exploring a cave. After finding glowing crystals in myriad colors, they decide to bury the gems near the willow tree and come back the next day to recover them. That next day, the gems are gone, but in their place is a beautiful rainbow—with a pot of gold at its end.

With just four lines on each page of text, this is a simple story. Hoppis embues it with an idyllic tone, first by having the boy remember the adventure with nostalgia, rather than experiencing it presently, then in the way she utilizes rhyme and repetition. The phrase “beneath the willow tree” is used three times—on the first and last pages, and once in the story’s middle— anchoring the text without slowing it down: “Purple, yellow, red and green,/ We picked all we could see./ Then walked back out, and laid them out,/ Beneath the willow tree.” The rhymes are fluid and easy to read aloud.

Beam’s illustrations can be awkward and unpolished: The boy and frog have rubbery elbows and knees that bend strangely, for example, and sometimes the frog seems nearly as tall as the boy, other times closer to half his size. Even so, they have a peculiar grace to them, flowing, and unrestrained, which supports the story’s most appealing aspect—that this is an adventure away from family, school, and the strictures of reality.

Froggy, Me, and the Willow Tree is an energetic and uncomplicated fantasy. While more professional illustrations would enhance the story, it should easily appeal to its targeted audience of first and second-graders.