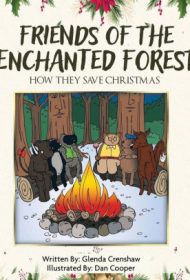 A skunk, fox, raccoon, porcupine, and monkey are sending their letters to Santa, when Santa, his reindeer, and sleigh fall from the sky, frozen solid. It’s the work of an evil witch, and a wise, friendly owl tells them they will need to travel to the far end of the Enchanted Forest, through five caves and a time warp to get the witch’s wand and save Christmas.

The owl gives them food and special tools, and after a hazardous journey, they defeat the witch, and a kiss begins to change her into a good person. The animals save Santa, and the witch is invited to live in the forest.

The book draws nicely from traditions related to quests. Each of the animals’ unique abilities and gifts prove useful at different times, for example, and the friends’ readiness to forgive the witch is critical to her redemption.

Unfortunately, other elements are problematic. The story features unusual locations, like a mountain inside of a cave, and it’s sometimes hard to make sense of the geography as the friends move from place to place. Descriptions can also be confusing (e.g., “The next cave was fire. The friends really had to sit and think of a way across”).

Inconsistencies abound. For instance, a big bird at the top of a mountain wants to eat the friends and is later described as “charging at them” before falling off a mountain. This implies the bird can’t fly, yet later, the bird appears, ready to fly the friends back to save Santa.

The illustrations often further muddy the waters. For example, the owl helps the friends and sends them “on their way,” but two pages later appears in an image alongside the friends as they head for a cave.

A lot of story is packed into this picture book. Revision is required, however, to make it all cohere.