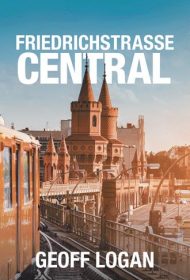 In this novel, Geoff Logan continues his saga about historical conundrums, international intrigue, and the Knights Templar. The time-jumping sequel (to The Legacy of Two Gemini Knights) retains similar themes but expands multiple storylines —all crystallizing in a cliffhanger conclusion.

The hero, circa late 1970s, is jet-setting Australian geologist Iva Davies, who sees a mysterious woman drop a ring in Singapore. Expediently, he later runs into the woman, German spy Arabella Maueraberger, in Moscow.

One of Arabella’s main purposes is to introduce her father into the storyline. He’s former Nazi intelligence officer Peter Maueraberger, who becomes Iva’s partner as he deciphers the unraveling plot. Flashbacks reveal Peter’s assignment by Goebbels to recruit eminent psychoanalyst C.G. Jung to join the Nazis.

The key storyline is finding the grave of “The Last Iman of Islam”; a legend claims that the epochal holy man’s resurrection, hand-in-hand with Jesus, will establish peace and justice on Earth. The McGuffins involved in this treasure hunt include the aforementioned ring—an artifact once housed in Solomon’s Temple in Jerusalem and said to hold mystical powers—as well as an iconic rag doll and a religious artifact that Logan curiously anthropomorphizes.

Simultaneously, Peter and Arabella are involved in “The Nursery Project,” a strategy to use a terrorist attack on West Berlin to reunite the country. This already overstuffed conspiracy also includes a corrupt banker, the Vatican, and the Mafia’s dirty money.

The story’s scope is admirable but the final product is problematic. Grammatical errors and typos abound. More importantly, the author breaks the old rule: show, don’t tell. Force-fed every point of exposition, readers will find that the tension is nil (barring a dramatic showdown between Iva and the villain on a Turkish island that turns out to be a feint). And while the storylines all have potential, they are blended awkwardly and lack finesse.

Ultimately, the novel might satisfy readers willing to persevere, but it’s likely to vex anyone expecting page-turning thrills.