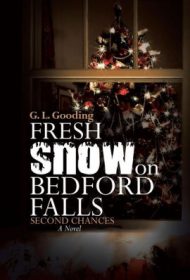 Fresh Snow on Bedford Falls takes up the story of George Bailey where Frank Capra’s 1946 film, It’s a Wonderful Life, left off.

Bailey may know now he has friends, but he also knows his business, the Bailey Building & Loan, is still under a cloud, thanks to the unresolved theft of $8,000. As the story gets underway, a bank examiner named Mark Jerome arrives to look into the crime. Jerome has an ulterior motive: he’s an Angel Third Class, assigned to convince evil banker Henry Potter there’s more to life than piling up money and seeking power.

An experienced investigator when he was alive, Jerome follows a long, twisted path to reveal how a tragic disappointment early in Potter’s life turned him into a cruel, selfish curmudgeon, capable of causing such harm to so many, Bailey being his foremost victim. But that’s not this story’s real surprise, which is a terrific reveal readers won’t see coming.

Those unfamiliar with the Hollywood classic may miss some references and find it harder to engage with the story than fans of It’s a Wonderful Life, and the narrative lags in the first 70 pages or so, bogged down with too much exposition that tries readers’ patience. But after this,  the book takes off on a wild ride that includes pivotal characters going down on the Titanic and two young boys riding an orphan train. As disparate as those events may seem, they are an entertaining part of this suspenseful, and eventually satisfying tale of loss and redemption.

The narrative includes some contrivances (e.g. just the right person is riding in Jerome’s rail car at the moment he’s most stymied in his investigation), and readers may wish to know more about a major character by book’s end.

But in spite of such issues, Fresh Snow on Bedford Falls offers many rewards. Overall, this is a creative and moving follow-up to a beloved story.