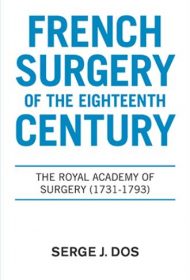 In his French Surgery of the Eighteenth Century, Serge J. Dos offers an extraordinary compression of facts, anecdotes, biographical portraits, procedural descriptions and lists of inventions, aiming to show how 18th century Paris “had become the greatest center for surgery,” and how the creation of the Royal Academy of Surgery “outshone all other achievements.” In fact, posits the author, its brief period existence, from 1731 to 1793, represents an unparalleled brilliance.

Dos describes the academy’s workings: where classes were taught, papers written and degrees obtained. He shows how the medals awarded for exceptional papers served to advance knowledge and how the sharing of knowledge amongst the academy’s “powerful personalities” produced an effective “collective effort in medical sciences and a center of serviceable scientific studies.” The surgeons’ biographies are surprisingly detailed, delivering personal information, as well as a surgeon’s professional contributions.

At the time of the academy, there was a rivalry between physicians, surgeons and barbers. (Barbers of that era practiced tooth extraction, bloodletting, boil lancing, and, occasionally, amputations, as well as the traditional shave and a cut). They jockeyed for patients and tried to hinder each other’s advancement. Dos describes their shenanigans and explains the historical basis for their differences.

Dos’s style is simple and straightforward. However, the author often fails to explain the medical terms rife in his book, which can make for trying reading at times. The text also includes some typos and grammatical errors.

Nevertheless, Dos’s book is so erudite and filled with interesting detail that it should appeal to many with a penchant for history.