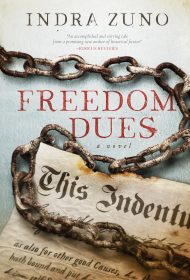 In the colorful and engaging Freedom Dues, Indra Zuno delivers an authentic, well-researched novel reflecting the plight of individuals forced to face the grueling hardships of indentured servitude in the early 18th century.

In 1729, beneath gray London skies, coal smoke rises from factories and streets are puddled with rainwater, urine, and manure. Here 10-year-old orphan Mallie Ambrose is arrested in a pickpocketing ruse, imprisoned, and ultimately sentenced for “transport” to the American colonies. Enduring an arduous 8-week journey, she reaches Maryland and is bought into domestic servitude for seven years.

Meanwhile, as Ireland is ravaged by economic blight, teen Blair Eakins and his brother, like thousands of other emigrants, are searching for a better life. In exchange for passage to Philadelphia, they, too, serve terms as indentured workers.

Through this artful, two-fold narrative, Zuno details the horrendous conditions these characters face en route to their destinations. Food is lacking, waste buckets overflow, lice are rampant, and intense squalls batter these ocean vessels. Neither does Zuno shy away from the dismal realities forced upon these individuals in servitude: Women terminate pregnancies to avoid longer service; runaways receive lashings and get shackled with iron collars, and more.

Zuno showcases Mallie as a smart, strong-willed character who appreciates the friendship of fellow servants, and is willing to become a “whipping girl” in exchange for the kind mentoring of the house mistress. When Mallie’s “master” loses her in a card game, Blair and Mallie’s paths eventually cross and a quiet, heartfelt romance ensues. An unexpected chain of events soon puts the couple on the run.

Zuno’s enticing saga strikes an even balance between informative narrative and textured dialogue and even includes a sprinkling of humor. Moments of potentially disconcerting Irish/Scottish dialect are easily absorbed by the story and lend the characters a natural charm.

In all, this well-crafted blend of research, characterization, and moving story progression should appeal to those drawn to entertaining, believable, historical fiction.