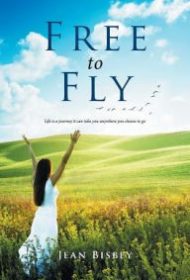 Set in Scotland, this novel combines concepts from the Law of Attraction and Christianity into a tale of good-versus-evil with a happily ever-after ending.

The story begins with first-person narration by Fergus, a psychologist who talks continuously about the power of thought, interconnectedness of all things, choice between cosmos and chaos, and universal spirit. One day he meets Sarah and invites her to lunch for a discussion of his favorite subjects. They bond over philosophy, food, and the Christina Aguilera song The Voice Within, even though he and Sarah are already in relationships with others.

From his counseling work, Fergus suspects something’s wrong with Sarah’s marriage, although the beautiful singer is reluctant to talk about it. In Chapter 2, Sarah (as first-person narrator) tells of her abusive husband, who alternates between cruel and kind. At one point, she’s so threatened by him that, “gaining frantic strength,” she “kneed him in the crutch [sic].”

Later, in a chapter narrated in third-person omniscient, readers learn that Fergus’s relationship is also dysfunctional. Abi, his pregnant girlfriend, attempts suicide and then reveals a dangerous secret.

At times, these narrative shifts can be jarring and confusing. In addition, one-dimensional stereotypical characters, repetition (Aguilera’s copyrighted lyrics are cited repeatedly throughout the text and used for the title), a predictable ending, and lofty language also impede reader enjoyment. (“It took much calling on my calm to enter the portals of sleep.”)

There’s also a philosophical problem at the heart of this novel. Fergus exhibits judgment, condescension, and exclusiveness in direct contrast to his enlightened beliefs. He thinks, “Abi’s brain cells were not able to cope with the principles of metaphysics, even watered down. She, like the bulk of the population, would flounder from one crisis in life to the next, basing her decisions on her emotions without reasoning….”

Though well-intentioned, this book falters, both as a philosophical guide and romance novel. Readers interested in either genre may be disappointed.