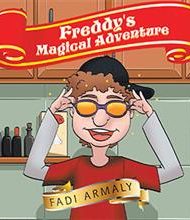 Freddy wakes on his tenth birthday and unwraps the present his father has left waiting in the kitchen—magical sunglasses. The sunglasses soon take them on a journey through space, to the planet Artisan. There, they meet strange creatures and search for water, finally solving the natives’ heat and drought problem in a novel twist that ties back to Freddy’s birthday cake.

Armaly is at his best when offering unique, whimsical touches, well-portrayed by Racquel Rodriguez’s colorful illustrations, such as a basketball and CD floating in space, or the trees of Artisan, decked in top hats and bow ties to collect water.

Armaly keeps his writing appropriately simple for children, but several flaws hamper the story. The text has mistakes in punctuation, word usage (e.g. “wondered” instead of “wandered”), and consistency between text and image.  (For example, an illustration shows Freddy and his Dad eating cake with an unwrapped present sitting nearby, but the text describes Freddy opening the present before eating his birthday cake.)

Sometimes, sentences can be puzzling, as in: “Chimo, the friendly but busy koala worked there and who [sic] believed the solution to Artisan’s heat problem was in what little rainwater fell from the sky.” And the author’s ideas can also be confusing, as when the koala explains that the best way to collect water is by letting the water fall into top hats and then down to bow ties. It’s unclear how the bow ties can be of help collecting water.

Freddy’s Magical Adventure requires an editor’s careful eye before it can appeal to a young audience. Still, Armaly’s imagination and obvious delight in storytelling come through, offering a glimpse into the potential of Freddy’s adventures in future books.