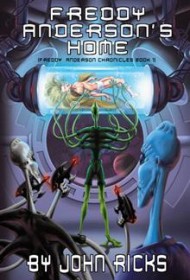 Freddy Anderson’s Home by John Ricks is a young adult science fiction story about a child genius who, unbeknownst to everyone around him, just might be humanity’s last hope.

The son of gifted scientists, Freddy began speaking at six months, tested with an off-the-scales IQ, eventually earned prestigious degrees and became a celebrated inventor – all by age ten. His talents at healing are supernatural, and his innate empathy has developed into full-grown telepathy.

When Freddy’s parents die in a plane crash, the government sees his talents as both a threat and an opportunity, and he is able to use this to seize a strip of secluded military land and pursue his inventions in private. His work has never been more important, because he knows something they don’t: An interstellar conflict is looming, and it could mean the end of the world.

Freddy is an endearing narrator, striking a credible balance between childhood innocence and the burdens of genius. He endures bullying, learns to stand up for himself and cultivates unlikely friendships with the all-female team of Navy Seals sworn to protect him. He even develops a crush along the way.

Intriguingly, we know immediately that future-Freddy has been captured by extraterrestrials; their musing about humanity prompt the flashbacks comprising this book. Yet the story does little to tantalize us with what’s to come beyond that, and while the novel moves rapidly through the first ten years, it soon loses momentum. Rather than recovering from the climax, Freddy seems to just be taking a quick breather before continuing on, which may leave readers feeling as if this first installment in The Freddy Anderson Chronicles is a bit incomplete.

If we’re to keep investing in Freddy in future books, it would be nice to have some hint at the challenges that await him. As it stands, this book is generally an entertaining read, but one that won’t necessarily propel readers onward in the series.