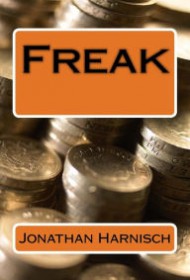 Jonathan Harnisch’s new novel brings back Georgie Gust, who has served along with alter ego Ben Schreiber as the author’s stand-in in other semi-autobiographical works that explore the traumas of characters afflicted, like their author, with Tourette’s syndrome and schizophrenia.

In classic Bildungsroman fashion, Georgie begins his journey in a swamp of self-absorption and self-pity—with good reason, since most of his fellow students mock his physical tics and resent that only he and Claudia understand the ideas being explored in Heidi Berillo’s unconventional philosophy course. Both Claudia and Heidi encourage Georgie to embrace his intellectual gifts with the same energy he devotes to self-destructive drinking and acting out. Georgie is taking tentative steps along that path when a tragedy involving Claudia jolts him into the realization that his are not the only sorrows in the world.

Freak marks new territory for this gifted writer, as he leads his protagonist haltingly towards maturity. It would be nice if he had given Claudia and Heidi the same kind of development: the latter is a textbook nurturing mentor, while the former signals her suicidal longings so consistently you wonder how Georgie could possibly miss them.

Some familiar Harnisch gambits—Ben’s role as an antic narrator blurring the boundaries between memory and invention; narrative asides by someone who might be Georgie or might be the author—seem less appropriate here than they did in earlier books. Still, missteps are bound to occur when exploring new territory, and it’s refreshing to see Harnisch expanding his—and his protagonist’s—horizons beyond the self.