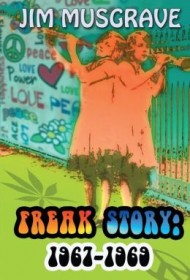 Set against the backdrop of the turbulent, drug-fueled ‘60s, a writer who was given up at birth seeks to discover his roots in the novel Freak Story: 1967-1969.

Buddy Hartman is a young, black, gay writer and music group promoter living in Minneapolis and on a quest to find the identity of his birthmother. One day he is shocked to discover that he is the son of Daisy Hilton, one of the famous Hilton Siamese twins who entertained in vaudeville shows in the 1930s.

Desperate to know more, he hitchhikes to Charlotte, North Carolina, where he finds the twins making a meager living at a grocery. Because he’s not ready to reveal his identity—and in an effort to help them —he introduces himself under the guise of wanting to aid them in re-entering show business by booking them at the upcoming Democratic Convention. Along the way, he and his mother and aunt meet a cornucopia of famous activists, political figures and musicians.

Though a promising set-up, what follows are too many detours, along with a multitude of long-winded, albeit intelligent philosophical discussions between these historical figures. Sadly, the cumulative effect is that the story comes to a crawl. Obviously, the author has done his research. In addition, the writing is descriptive and tight and the story chock-full of fun, finely writ, quirky characters. But at times, the book reads more like a collection of funny, reflective political essays than a cohesive novel.

Fictionalized accounts of real history are inherently both frustrating and intriguing; unless readers follow up with their own research, they won’t know fact from fiction. This story is no exception. On the other hand, this surely original and hard-to-categorize book provides more than adequate motivation for readers to search for more information about the ‘60s and the Hilton twins.

In any case, buckle up for a freaky, psychedelic ride with a who’s who of the 1960s in these pages.