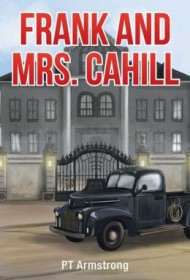 During a shameful chapter of our nation’s history, a black man could be killed for even the appearance of a sexual overture to a white woman. Against this troubling backdrop, author P.T. Armstrong weaves the fictional tale of Frank and Mrs. Cahill.

The story opens in 1940s rural Arkansas when Frank Mayberry, a black man, arrives at the home of Nancy Cahill looking for work. Mrs. Cahill – it was customary in the Jim Crow South that black people be addressed by their first names, and courtesy titles were reserved for whites – hires Frank to do odd jobs on her property. Her husband, an oil man, is away most of the time and her children are grown. She is lonely, bored and curious about the man she hired. They quickly launch into a sexual relationship initiated completely by her and, though reluctant because of the danger, eventually welcomed by Frank.“ … this could get me killed, missy! On top of dat, you is my boss!” Frank tells her.

This has the makings of a fascinating character study about race, sex and gender and the power that comes with all three. While it would seem Mrs. Cahill holds that power because of her white privilege, she is vulnerable to her neediness. Frank seemingly has no power other than his ability to sexually satisfy her, but he holds himself distant enough to level the field. Meanwhile, the threat of dire consequences lurks.

Despite its promise, the book never develops into more than a crude chronicle of their sexual encounters. Readers never learn who these people are or why they came together. Lust and curiosity are powerful motivators, but without more insight, the instantaneous coupling rings false.

Forbidden romance is usually tantalizing but this one, despite its powerful historic significance, squanders the chance to make a statement about America’s racial past.