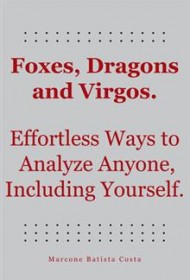 The author of Foxes, Dragons and Virgos aims to show how numerology and the Chinese and Western zodiacs can help readers better understand themselves and others.

The chapters on the Chinese and Western Zodiacs are thorough but offer mostly basic explanations of the various signs, while the numerology chapters are much more extensive. They explain the Pythagorean and Chaldean systems of assigning numbers to each letter of a person’s name, and include detailed and fascinating explanations of the traits associated with those numbers. The author also interlinks Zodiac symbols and numerology—for instance, the number 2 (partnership) is most associated with the Rabbit and Pisces—and includes examples of famous people with those traits (Gandhi was a 2).

The last few chapters delve into the author’s philosophies on how to be a high achiever, including tips on child rearing and how to stop smoking. While this is unexpected and a bit jarring, it’s a small problem compared to the poor grammar and syntax that permeate the majority of the text, making it extremely difficult to decipher. An example: “It comes with the fact that he tends to get carried away thinking in something else (not uncommonly deep and intricate thoughts) and in his unconscious necessity of being exercising his memory.”

The author is a native Brazilian living in the U.S., and the book reads as if he is either not fully fluent in English or it was written in another language and poorly translated. A thorough edit could make the book much more understandable and allow the author’s extensive knowledge of his subject to shine through. As it stands, Foxes, Dragons and Virgos makes for a challenging read.