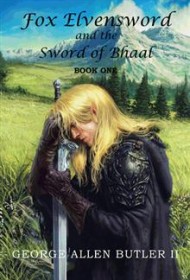 Written by a former soldier with an interest in medieval weaponry, Fox Elvensword and the Sword of Bhaal is a heroic tale in which beings are killed and come back to life, elves and dragons struggle for dominance and a legendary weapon fulfills its eerie destiny.

The sword of Bhaal, said to be “older than any of us know,” carries within it the soul of everyone it has killed. The sword is a character in its own right, “born” when the evil Serran uses it to cruelly murder an innocent girl. Its destined owner is Fox Elvensword, a young elf begot by an erring priest. Fox gains the attention of the sorcerer Murrell who, sensing his talents despite his questionable heritage, teaches him the arcane art of spell casting.

Once Fox possesses the mystical sword, an irresistible force impels him on quest after quest as he secretly searches for his lost lady Ellwin. The blade guides him to perform remarkable feats; he may yet be selected to train as a ranger or knight, but the immediate challenge facing Fox is the destruction of Terantheraxus, a dragon that is raiding and killing his elven kin. In close combat with such a powerful and dangerous foe, Fox and his sword will prove their worth.

In this martial arts-themed fantasy, Butler uses the beings, language and imagery that have come to be accepted in this genre – elves, dragons, griffins, orcs – although perhaps he goes to the well of these fantasy conventions a bit too often. He constructs a frequently gory saga of battle and conquest in a society where males and females are equal in power, aggression, beauty and courage. At times, these attributes seem trite and contrived in Butler’s hands, but fantasy fans who appreciate familiar godlike names, idyllic settings, noble concepts and interspecies warfare are likely to enjoy this tale.