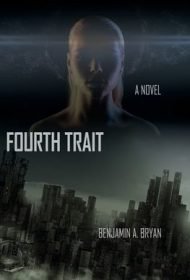 Benjamin A. Bryan’s debut novel—a dark science fiction thriller set in 2095 — takes place in a near-future where more than 95% of the population has been wiped out by the Great Catastrophe, and those who survived all have varying levels of psychic abilities.

The story centers largely around Raile Alton, a renowned investigator working for the Unity Energy Agency (UEA) tasked with finding a way to destroy the “unattached,” spirits that still haunt the physical plane. With the UEA close to perfecting “transference”—transferring people’s essences into genetically perfect replacement bodies—Alton’s mission is to permanently remove the “diseased” spirits from the world.  But as this dream of an immortal utopia looms closer, he begins to uncover a massive conspiracy. The revolutionaries fighting the UEA may not be the villains in this high-stakes struggle for world dominance.

This narrative is powered by meticulous world-building, but it’s the cast of complex characters that make it hum. The resistance leader Delva Brownson—who has lost everything fighting the UEA—is a fascinating character, but Raile’s story arc is even more emotionally intense: He thinks of himself as a “fool who had spent a lifetime of being a peripheral cog in other people’s agendas” who realizes his entire existence has been a lie.

While the novel’s pacing in its first half isn’t exactly brisk—the (impressively) intricate storyline needs time to be set up—the last chapters are essentially one extended, breakneck-paced, action-packed sequence that will keep readers turning pages until the end. The conclusion, however, is a bit of an anticlimax after such an adrenaline-fueled build-up.

This is an ambitious storyline that explores some weighty concepts: humanity unlocking immortality, the next stage in human evolution, the afterlife, etc.  Despite its minor flaws, readers who enjoy intelligent speculation will find this dark, post-apocalyptic thriller entertaining and thought-provoking.