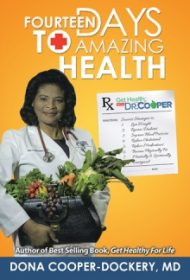 Internal medicine physician Dona Cooper-Dockery shares a program that has helped her patients in Fourteen Days to Amazing Health.

Cooper-Dockery began incorporating “lifestyle” medicine into her practice in McAllen, Texas (rated the country’s most obese metropolitan area in 2012) to help patients lose weight and improve their lives. As its title suggests, her book details a two-week plan, packed with scientific evidence, on why and how readers should change their diet and activity levels if they’re enduring obesity-related, chronic illnesses.

The first section explains the plan’s science: e.g. why legumes and whole grains are important. The next section outlines each day, with three meals, three different exercise regimes (depending on a fitness assessment), and inspiration to guide readers. The book’s remainder details exercises with photos and more than 100 recipes.

While the book offers a straightforward approach to wellness, its specifics may frustrate readers. For example, readers are instructed to eat “whole-grain plant-based foods” and to “avoid the consumption of animal-based foods,” but the plan is never called what it is:  vegan (the term is only once mentioned in an eating-out section). All red and processed meats are specifically excoriated, but not fish or poultry, which may leave some to wonder if they could be eaten (despite the admonition about animal-based foods), and if so, in what amounts.

The meal plans don’t include snacks, and some directives are confusing. For instance, readers are told to eat vegetables raw or lightly steamed (to better retain nutrients), but many recipes require sautéing. Breakfast cereal includes non-dairy milk one day, but not the next, and sometimes quantities aren’t specified, i.e., Day 5 lunch lists “steamed broccoli and cauliflower (enough).” Additionally, patient success stories are included, but like the rest of the prose, they are told in a passive voice.

Cooper-Rockery genuinely seems to want to help people, and she’s clearly spent considerable time designing her program. But a closer edit and some clarifications would greatly enhance her diet plan.