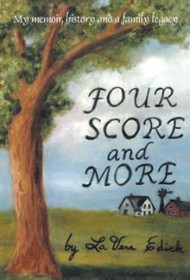 In Four Score and More, LaVera Edick takes readers on the journey of a lifetime – her lifetime.

Born in rural Nebraska in 1925, Edick is an interesting woman and a pioneer in many respects: literally so, during a hardscrabble childhood, yet also in a successful business career that started in the 1950s. She has gone through four marriages and raised five children and now is reflecting on what she calls the winter of her life.

The book is a treasure trove for Edick’s army of relatives (she had 13 grandchildren and 20 great-grandchildren at the time of writing), with family history and photos, genealogical research, and her recollections, often fleshed out with her artwork. She even includes some family recipes.

But an inherent difficulty with memoirs such as this is achieving a broader appeal. For family, this book is priceless. But other readers might not find it as compelling. Edick tries to cast a wider net by mentioning the important historical events she has witnessed in abundance: the Depression, World War II, the unsettled 1960s, and endless Mideast wars, to name a few. But often these events are just dropped into the narrative with little perspective or personal connection. She interjects, for example, a few paragraphs on the 1936 Berlin Olympics into the middle of her description of her family’s life in California. As such, the inclusion of these outside events seems forced.

Readers will find some nuggets here – such as how packed-dirt floors can be made to shine by washing them down with milk – that will catch their attention, but most of the book consists of family matters. While some of these matters are interesting, there isn’t enough here to carry general readers nearly 400 pages.

Nonetheless, Edick’s writing style is pleasant, and she comes across as a smart, sweet grandmother who wants to tell her story for a family she clearly loves.