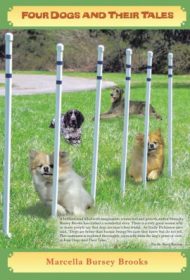 In this largely light-hearted tale, four dogs and their “moms and dads” shed light on the events in the daily life of dogs—and their parents.

The story opens with the viewpoints of four dogs as they contemplate their situations. There’s a scruffy, hungry mutt who was called Mozo as a puppy. Now mature, he has become nameless, as well as homeless, exhausted and scared. Then there’s Topaz, a German Shorthair Pointer who has a good home but is a disappointment to dad, Cole, because she won’t chase deer. Readers also meet Tibetan Spaniel puppies Kissy and Kawdje as they are being adopted by Essie and Evan.

The four soon meet as they enter the dog show circuit. (Mozo, now Michael Archangelo, has been adopted into Sarah’s loving home.) And so the canines and their families bond. The dogs discuss their individual living arrangements and outlooks on dog life. For example, Michael relates seeing dogs riding in cars, the wind blowing their hair and flapping their ears. “It’s one of the best perks that life has to offer a dog,” he says. Responds Kissy, “It must be a guy thing because it doesn’t give me a thrill.”

While the families make the dog show rounds, they become increasingly aware of the difficulty of traveling with animals—and an idea for a business is born. Meanwhile, there’s a wedding, a thwarted assault and a water rescue.

Although the opening from the dogs’ viewpoints can be off-putting—some might find it too cute or a contrived play for the heart strings—the tale soon redeems itself. The characters—both two-legged and four—are genuinely likeable; the behind-the-scenes look at the world of dog competition is enlightening and humorous; and the quest for a better means of animal travel and care proves an ambitious and worthy goal.

The story is most likely to be enjoyed by dog lovers but should also engage anyone looking for an uplifting read.