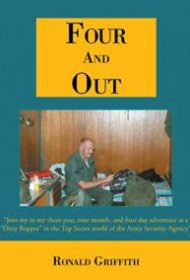 At one point in Four and Out, author Ronald Griffith writes, “If I had to describe my time in Vietnam in one word, that one word would be BORING.” His memoir of the nearly four years he spent in the Army is hampered considerably by that fact.

Griffith joined the Army in 1964 after graduating from Washington State University with a degree in general agriculture. When he didn’t qualify for Officer Candidate School, he signed up for the Army Security Agency, a special branch of the military that required top-secret crypto security clearance.

After training, he was eventually sent to Phu Bai, Vietnam, where his job as a “Ditty Bopper” was to find and write down Morse code transmissions from enemy targets broadcasting over the radio. What happened after Griffith recorded the messages was unknown even to him. He never knew what, if anything, the messages meant and whether they resulted in any significant actions during the war.

Far from live combat, Griffith spent his time in relative comfort, living in air conditioned barracks with four meals a day, freshly laundered sheets and even a swimming pool for part of his time “in country.”

The only true action Griffith experienced was during the Tet Offensive when rockets were fired on his compound and destroyed a barracks. While he did have to hightail it to the trenches, he doesn’t mention many casualties, and there’s no talk of heroics or even counterattacks. His biggest concern was making sure he had enough cigarettes to tide him over while he waited out the enemy.

This lack of compelling detail and action permeates the book, which seriously limits its mass-market appeal. While it’s admirable that Griffith wanted to share what life for combat support personnel was like during the Vietnam War, unless you’re related to Griffith or have a keen interest in learning more about the Army Security Agency, the reach of Four and Out doesn’t go far.