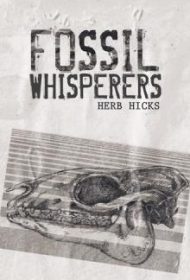 Herb Hicks’ novel, Fossil Whisperers, opens shortly after the Civil War as a group of students from Yale travels west to dig for fossils. Their quest resulted in one of the first real-life skirmishes in what would become known as the Bone Wars, in which two American paleontologists, Othniel Marsh and Edward Cope, would eventually consume each other in a fierce rivalry of discovery.

The Yale men, acolytes of Professor March, soon enter a foreign landscape filled with dangers as well as dinosaur bones. Although always guarded on their explorations by Army detachments, the fossil hunters are beset by hostile Indians, marauding desperados and an unforgiving landscape, none of which much delays their fevered hunt for prehistoric bones.  Soon one of them, Jake Harding, despite all the risks, becomes so smitten by frontier life that he falls in love with the land and with Jen, a feisty Wyoming beauty. He marries her and settles on the family’s ranch.

His choice brings to the narrative a welcome dimension beyond the obsessions of the Bone Wars and including feuding settlers, bands of horse thieves, murders and shootouts. Most notably, though, the novel tells the story of love and family against a backdrop of the hardships of the colonization of the American West.

Jake is a well-drawn figure who brings the plot’s two strains—fossils and frontier—together into a unified and intriguing whole, as even while he becomes enmeshed with ranch life, he remains answerable to the siren call from the professor in New Haven to drop everything and head off on another dig.

The author delivers occasionally stilted dialogue, which can be offputting, and the ending seems improbable. Still, the story is rich and varied, taking us to a time and place where the country, just emerging from its greatest trauma, began to find its way.