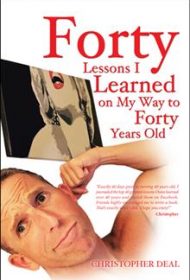 Author Christopher Deal’s book concept—detailing just prior to his 40th birthday the 40 lessons he has learned in life—originally launched on his Facebook page.  When his Facebook friends suggested he package it in book form, he decided to follow their advice.

Forty Lessons I Learned on My Way to Forty Years Old is a selection of Deal’s “true-life” observations that touch on a wide variety of subjects befitting a person skirting the edges of middle-age. He states the lesson in each chapter and talks about something in his life that prompted his learning it. For example, one chapter notes that “This lesson focuses on what not to do if you are going to cheat.” Deal then recounts how he discovered his partner was straying.

Some of his commentary is fairly generic (“[t]hings are not always what they seem”), but Deal spices things up by including more unusual memories, such as discussing his father’s dealings in the Florida drug trade. Fortunately, the book’s titillating parts don’t eclipse the sweeter subjects he adds without apology; “Take your mom on a date” is one unexpected but welcome recommendation.

While Deal offers some provocative thoughts, his book suffers from inconsistency: Sometimes chapter titles detail the lesson he will talk about in that chapter (“Weed out the Competition”), but often they are simply labels (“Black Eye”; “Toxic Friendships”); sometimes the lessons are stated in the beginning of an entry, sometimes at the end. Additionally, the memories or ideas he recounts often seem only loosely related to the stated lesson. In the chapter titled “Be Honest About Money,” for instance, he notes that “I don’t share my finances with anyone, even in a relationship”—which seems puzzling when talking about honesty.

Overall, the material feels like something that friends would, indeed, enjoy reading on Facebook. But to attract a wider audience, it requires more polish in its presentation and editing with an eye to sharpening its focus.