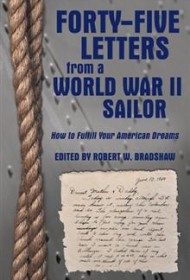 While the significance of official documents such as the Declaration of Independence is obvious, eye-witness accounts of important events also provide valuable historical perspectives. Thus, these letters from 18-year-old sailor Frank B. Bradshaw, Jr. to his parents during the last months of WWII offer insights into daily ship life as he recounts the emotions of a green Tennessee lad exposed to military bureaucracy, mates from across the country and countless new places and experiences.

Because of wartime restrictions preventing mention of anything that might alert the enemy to American maneuvers, young Frank limits his letters to ordinary concerns, such as loneliness, the quality and quantity of food, and his reaction to learning new skills on the various ships where he served. In almost daily letters, Frank describes sailing along the Atlantic coast with later stops in Europe, offering mundane mentions of other ship sightings and routine duties.

Sometimes, he reveals his naivete, as when complaining about the quality of English food in the war’s last days, seemingly unaware that many English people were starving from food shortages. During leave in New York, he is awed at the big city sights, but, surprisingly, never mentions VE Day, which occurred at that time. After the war’s end in August of 1945, Frank chafes at military delays in repealing the draft so that he can return home.

This collection of simple, homey letters has value for its depiction of an ordinary boy living through extraordinary times. The book is marred, however, by its three-part conclusion filled with unrelated religious proselytizing and odd ramblings. Here, the editor dreams of a “scientific community that will continue to see God in their theories, formulas and experiments” and also writes of the “Wobble Toward Sagittarius.” Such comments provide an unnecessary and unsettling distraction from the book’s main thrust.

Still, it’s easy enough for readers to skip this part and focus on the letters alone. If they do, they will have a front-row seat to the daily rhythms of ship life and insight into the men who served during WWII.