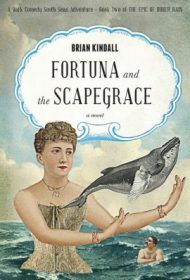 Throughout this captivating, darkly comic, often absurdist novel, the narrator and central character takes on multiple identities with the ease of a chameleon changing its colors.

When first met, our protagonist is down and out in San Francisco in the mid-19th century, desperate “to be rid of Erstwhile Me,” a wish granted sooner than expected as he is drugged and shanghaied onto a clipper ship short of crew.

Once aboard, to set himself apart from all the “Smiths” and “Jonses” who had joined the ship’s company under similar circumstances, he signs on as Hoper Newfangle, befriends a pastor profoundly ignorant of the Bible, cares for a seemingly suicidal nanny goat who spends much of her time fending off randy sailors, and has occasional flashbacks to his childhood in France and his dreams of becoming a romantic poet. Clearly, the author skillfully draws implements from the toolbox of magical realism to assemble the structure of his novel.

The magic continues when the ship founders in a windstorm and the narrator is flung onto an atoll in the South Pacific that happens to be home to the pastor’s long lost flock and even longer lost love. Swiftly, the shipwrecked sailor slides into the persona of his absent friend, claims the man’s love as his own, and prepares to be anointed as leader of the Shining Redemption. Eventually, this all leads to a complicated denouement involving the goat, a fortunate tsunami, and other oddities.

The author handles this tasty stew of a plot with verve and humor, remaining in tight control of every deviation. This allows readers to easily follow the many plot turns and revel in the lively characterizations. While every character fits into the story’s fantastical construct, the narrator/protagonist stands out, in particular, as a most memorable rogue.

Those who prefer a straightforward plot may be deterred by the many twists and turns here, but all others will delight in this well-wrought and highly satisfying tale.