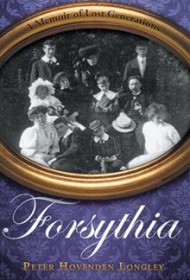 In his expansive memoir, Forsythia, Peter Hovenden Longley documents Victorian- and Edwardian-era upper-middle-class British society primarily through the lens of John Galsworthy’s The Forsyte Saga, while juxtaposing Galsworthy’s text with history of the British Empire and his own personal anecdotes.

Born into the upper 3 percent of British society – or “Forsythia,” as the author refers to it – Longley firmly establishes himself among the caretakers of the Empire, an elite class with rigid moral codes that govern everything from education (the finest boarding schools) and sporting interests (cricket instead of soccer) to marriage (divorce is unfathomable) and other decidedly British cultural institutions such as tea (though the author never liked it), posh social clubs and, of course, king and country. But Longley declares that he was born during the twilight of “Forsythia” and witnessed its demise due to wars (from the Boer Wars to World War II), class tension (the rise of labor unions) and the fall of the Empire (culminating in the loss of the Suez Canal).

Forsythia is at its best when Longley expounds upon his family history and his own exploits during his proper English upbringing and his years abroad, as he spent over a decade in Ireland and nearly 40 years in the United States. The book is at its most cumbersome when it relies heavily on Galsworthy’s text, which often appears for pages at a time in an italic font, creating a frustrating reading experience. Without prior knowledge of (and even keenness for) The Forsyte Saga – something the author highly recommends – it’s easy to get lost in myriad characters and interweaving plot lines. Still, with the popularity of programs such as Downton Abbey, books such as Forsythia remain an integral part of an alluring cultural landscape, and readers will glean interesting information if they can persevere through this hefty offering.