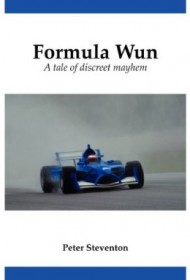 Formula Wun takes an inside look at the fast, expensive and often insane world of Formula One auto racing. When an uncouth South African driver named Rothman becomes the star driver for the Cameron Racing Team, a new kid on the block with a prototype car breaks into the racing world on the dangerous back of Rothman’s skilled but reckless driving. One Grand Prix follows another as Rothman keeps coming up short until a big victory at Monaco.

At the beginning of the book, the racing terminology throws the reader in an unfamiliar world of high technology, high costs and high speed. Yet as the story goes on and the racing lingo builds up what might have been an interesting element in creating this novel’s distinct world, it becomes a domain for specialists to the point that it’s hard to imagine anyone not already deeply knowledgeable and interested in Formula One racing wanting to read the book.

The novel also suffers from repeated uses of inappropriately capitalized words and all caps to give emphasis, such as in this all-too-typical sentence “WE must help HIM.” The author also has a tendency to give place background by guidebook-like descriptions, describing Rothman’s first trip to London by listing the city’s most famous sites. There are moments where Rothman’s character shows sparks of interest, but the need to remind the reader how reckless and macho he is on almost every page becomes highly redundant.

It’s possible that Formula Wun may hold some appeal for racing buffs looking for an offbeat book about their favorite sport, but the lack of tension and the unfortunate writing tics make it a trying read even for those interested in seeing how the races turn out.