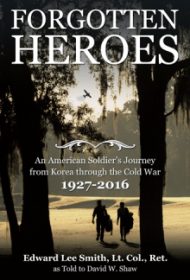 War forces impossible snap decisions but often fails to prepare soldiers for the memories that will follow them through life. In Forgotten Heroes, Edward Lee Smith illustrates that that those demons are hard to shake. Nearly 90 years old, he’s only now begun to face them, and it makes for a gripping story.

Smith lives alone in the mountains of New Mexico, and the story cuts between present day anecdotes and him reading the life story he wrote by hand and bound in a loose-leaf notebook (a ghostwriter helped organize the story as presented here).

Born in Philadelphia, he and twin brother Fred were given up by their parents and raised by maternal grandparents on a North Carolina farm. As teenagers, Edward and Fred were eager to serve in WWII, but by the time they were drafted during the Korean War, they were adults and wary of combat. Skilled riflemen, they were often in the thick of battle with King Company, Seventh Infantry Division. Then, sent home on leave when their grandmother suffered a heart attack, both were horrified to learn that their company was almost entirely wiped out while they were gone. The author’s relief at his good fortune collided with survivor’s guilt.

This isn’t just a war story, though; Smith is philosophical about the role his behavior played in his two divorces and reflective about the progress African-Americans have made in his lifetime. He writes, for example, of his amazement that an African-American was elected president not once but twice.

Forgotten Heroes is warm and conversational, and the author’s long view of history, especially the history of race relations, is compelling. Many elements of his life fly in the face of stereotypes, such as his grandparents’ owner-operated farm (his family weren’t sharecroppers, nor were most people they knew).

Ultimately, readers will conclude the book knowing more about the war and hoping Smith continues to make peace with his role in it.