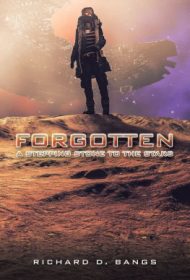 In Richard D. Bangs’s imaginative novel, Forgotten: A Stepping Stone to the Stars, fear, mistrust, and dissension emerge as humans establish their first contact with aliens.

Divided into two parts, the story begins with an horrific event: a fuel tank explodes at a Search for Extraterrestrial Intelligence (SETI) station. SETI is ahead of other groups after finally establishing first contact with aliens, and the arrival of the aliens, called Progenians, escalates tensions between nations and rival groups seeking exclusive access to Progenian technology and consequently to control space mining.

Jarrod McKinley works with SETI to ensure the success of the relationship with Progenia. Meanwhile, antagonists are determined to stop SETI and Progenia’s collaboration, and someone in McKinley’s inner circle is out for revenge against him, waiting for the right opportunity to finally execute his plan. The second part follows McKinley as he leads a team on a planetary exploration mission with important implications to his world.

McKinley is well-developed, with the author including information on his family background and romantic involvement with another main character. Supportive characters are equally impactful, adding depth to the plot.

The story is replete with suspense, and striking descriptions of creatures from other planets make for a thrilling read. For example, while exploring other planets, the space team faces alarming situations, including a sentient planet bent on protecting itself from intruders; gigantic, strange-looking animals with triangular forms; snake-like vines that can understand communication, and rapidly growing pollen that covers everything in its path.

The novel, however, reads like two separate books. While the parts have commonalities, the first focuses intensely on the establishment of first contact between the aliens and humans, while the second is largely dedicated to space exploration. Fortunately for readers, both parts are absorbing.

Despite the somewhat divided narrative, Forgotten: A Stepping Stone to the Stars is a captivating work that should please science fiction fans.